I met the guy we?ll call ?Steady Freddie? on a March 2015 Grand Canyon float trip. Tall, silent, with piercing brown eyes, his face always angled up toward the upper reaches of the canyon, some track of music playing in the back of his head.
I only spoke to his wife of 37 years once, when I called him this spring about some detail of our April trip this year, for which he had agreed to be trip leader. I told her I was impressed with his organizational skills.
?He is OCD and anal retentive,? the frustrated-sounding woman breathed heavily into the phone. More information than I?d asked for.
?He?s meticulous,? I corrected her as politely as I could. But I sensed I was peeking into a dark cave. 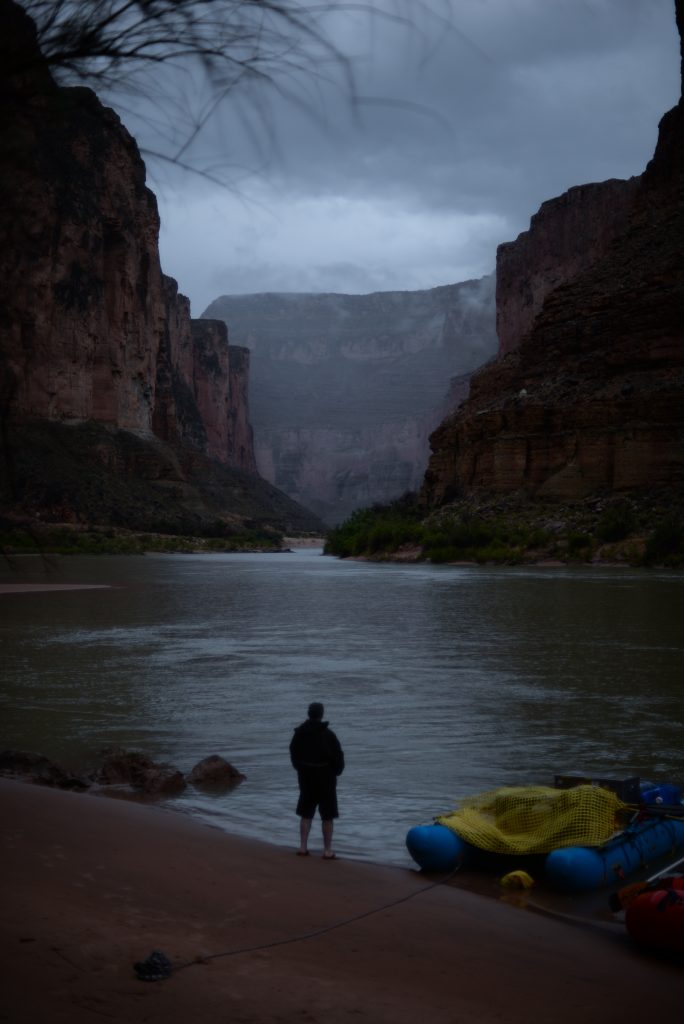 Freddie brought two boats to the trip, one I insisted on renting, belonging to his son, who was unable to join us.
Its? a lot of work hauling a raft to the Grand Canyon, a raft and the requisite half-ton of gear. But Freddie hauled two. Forth and back. And he forgot nothing.
My son, known in this space as ?Chance,? had agreed to row the second boat, when a father-son team of rowers had to back out a few days before launch because of a medical emergency.
Arriving at Marble Canyon Lodge where I knew Freddie was staying, I spotted his big truck and trailer immediately. I left Chance there to help Freddie rig and I departed to deliver boxes of groceries to various other boatmen. I knew my kid?was in good hands.
At the launch site another trip had spread itself across the entire ramp, its seven boats leaving space for just two of ours.
Freddie soon arrived with Chance, surveyed the scene and clambered back into his truck. Soon I spotted Chance floating down from the reeds upstream. Freddie would launch both boats from off the ramp entirely, preventing any conflict. Both Freddie?s pre-rigged boats would float offshore, affixed to the outer edges of our two boats that had been granted space by the other crew.
My tactics were more direct.
I spotted a friendly-looking woman among the other crew and asked if maybe they could scoot together a little. She said it wouldn?t be necessary as they were about to leave.
Three hours later she repeated herself –they were just about to leave–so I went to the other boat riggers who graciously pushed and pulled themselves together to make room for the two more boats we had to launch.
This other group, which would be known to us as the ?Montana Seven,? would leapfrog us through the canyon, sharing a camp generously with us once, singing late into the night around a shared campfire.
Freddie never sang with us.
But I thought I heard him humming under his breath as he moved gracefully through his kitchen, the place he clearly loved to be.
Freddie?s kitchen featured a four-burner self-supporting gas stove, another two-burner table-top stove and a blaster?a device used to rapidly heat large quantities of water?used every meal for dishwater.
I noticed the Montana Seven had a single two-burner stove, the kind we all have in the backs of our Subarus for weekends away.
Freddie?s kitchen featured drying racks and a special net with more than a dozen slots for serving spoons, ladles, spatulas of every kind. He also had a special knife-keeper, silverware storage, plates, bowls, mixing bowls, collapsible measuring cups, pots, pans, graters, lids, and no end of Ziploc bags. Everything fit into a huge drybox we carried to Chance?s boat every morning ? until Freddie figured out it was easier to carry it empty and pack it onboard.
Freddie slept every night on a cot with a Cabela?s drybag next to it, placed with a precision that made me suspect military training.
But I would learn that Freddie is a peace-loving man to a fault.
He would do whatever was asked of him, reasonable or not. He quietly digested information and almost as quietly, made the decisions his leadership demanded.
His cot, set up after everyone else had chosen the prime sites, often appeared in the kitchen itself.
And because Freddie awoke to make coffee before anyone else, his cot was never in the way.
The calm, slow approach to everything he did earned him the name ?Steady,? the idea of a rock-climbing wonder-woman we will know as ?Diane.?
Steady Freddie guided Chance through all the knowledge and confidence he’d need to make a flawless run through the biggest whitewater in America, Chance’s first time on the oars.

Then one night at mile 220 camp, known among the knowers as ?Gorilla camp? for a face on a rock across the river from it, that moment arrived when we realized the trip was going to end soon. My spirit ground to a slow drag.
Then Alex started playing La Bamba so Courtney and I started pulling people out of camp chairs to dance salsa with us.
As it grew dark, Alex?s guitar became silent so?Freddie set up some speakers in his kitchen. Soon Sade was whispering the mood we all felt. Freddie danced with every woman in camp. And we all swooned a little.
Diane came up with a new name for him: ?Smooth Operator.?
But I got up close and smelled him, I just couldn?t resist. ?You smell good,? I said, wondering if his wife back home even knew this.
?That is highly unlikely,? he said.
Then it was someone else?s turn.
More like ?Sweetest Taboo,? I told Diane.