Stripes, an orange barn cat, would keep scarce, the barn?s owner, a middle-aged woman told me. The woman, fed up with Colorado winters, had packed her horse trailer for Florida. She pointed to the rafters where she had spotted the feline?s ears. I cat lurked, nestled in the pink blanket of insulation that separated the horse stables from an attic. Stripes had climbed a steep ladder to achieve the cozy loft, so steep I wondered if the ladder wouldn’t tip back if I attempted the same climb.

Three months later, early February in Colorado’s crotch of coal-country, here I am, housesitting on the howling plains of nowhere (thanks Poe Ballantine.)

I?ll check on Stripes, I decide on Day 1.

I have grown unaccustomed to winters at 6,200 feet in the West so I need some reason to get outside. To the barn and back. A great start.

I have checked the barn daily now for three weeks and have seen evidence.

The food in the cat food dish, replenished from a galvanized pale locked shut with a bungee, disappeared regularly until we moved the desk from underneath it.

I needed a desk. I scrubbed every surface and took it into the?living room.

I moved the cat food dish to a cat-accessible corner shelf. I?even shifted?the filthy padded office chair so Stripes might have used to reach the food. Stripes must have made some effort to shed on this vile step-stool, so thoroughly had this task been accomplished.

But the cat food remains untouched.

In the farthest section of the barn, the part that has a door open wide enough for a small pony to enter, I found a dead rabbit. The least edible parts of a dead rabbit, I should say. Subfreezing temps had kept it fresh.

Could a cat even catch a rabbit? Locals informed me it must be a jack rabbit, no small bunny.

When temps get above 40, the time odiferously comes?to employ the snow shovel to remove the rabbit, which I noted, had been white. By now, it was really hard to know that it had been a rabbit. Even the ears were gone.

A few more?inches?of snow allow me to examine tracks in and out of the barn.

Surely this is a fox, I conclude.

Maybe the fox has eaten Stripes too.

I hike the back 20, all I can muster without snow shoes. I sink in to my knees, sometimes deeper. I find a den with tracks radiating to distinct points: a distant tree, a closer bush, the barn. But I can?t figure out to whom the tracks, fuzzed over by hoarfrost, belong. 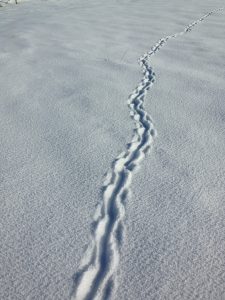 The warm temps make the deep snow even harder to get through. Then the sky clears and the temps drop to single digits. Suddenly, not only can I walk on water without getting snow on even my bootlaces, I can walk the fence of the entire back 40. So that?s what I did today.

I quickly spotted the rabbit tracks.

Then I confidently confirmed that Stripes still lurks ? but the certainly-cat-tracks head straight for the horizon, the distant horizon where I often see minuscule black cows forming a line where hay is daily distributed.

But I also found at least three other distinct tracks?not to mention the ones that appear, wander around for about 20 feet then disappear. Birds.

I paused in thought. This, maybe this is MY hair from last summer, the last time I visited this fence. No, it is too thick and brown. Elk, antelope, deer all frequent the neighborhood. But this hair is almost 12 inches. I remember reading in the paper that someone hit and killed a wild horse on a local highway last week. Hmmm.

The tracks interact with each other and I wonder who is following whom. Some cross a slope, ignoring the barn. Some approach then wander away from the barn. One set seems labored, the creature dragging something, maybe a dead something, maybe just its tail.

I know what you?re thinking.

No. I?m not going to install motion-sensor cameras.

That would be cheating.

Besides, then what would get me out of the house?